A Gonzo Story on Digital Journalism

We need to be disloyal to everyone, says a leftist muslim wine drinking woman and throws her glasses on the red velvet table, while a committee of serious looking men nod in approval. They’re the establishment speaking at a journalism festival and they’re telling a horror story:

Objectivity is dead. It never even existed. We deluded ourselves. We’re human and weak, we always had an angle, and objectivity is the angle of power. But the world is changing fast and nobody is sure what “power” even means any more. Journalism is drifting towards emotion and it’s taking us with it.

“It’s like the basic element of our profession is gone!”

So we’re sitting in these cushy chairs in the Hotel Brufani Palace, in a medieval city on top of a hill, sipping these small Italian coffees and talking about how we lived in a lie for half of our lives and the other half doesn’t even promise to tell the truth.

It’s not just this hotel. Thousands of journalists are creeping through Perugia’s narrow streets, eating ice cream and searching for redemption. During the day the city looks like a painting and in the night it feels like you’re walking inside an embalmed corpse. There are stone churches everywhere, but redemption actually comes from conference halls, where they preach the future and teach you how to spin it.

For what it’s worth, we lived a brilliant lie. One hundred years ago, the newspapers were openly funded by this political group or the other to spread their propaganda. At one point, they realised there’s more money to be made if they build a common ground for political elites and sell advertising to everyone. They called this “objectivity”.

It was a bit of a stretch, but it worked for a while, and we had our good times — Watergate and all. Then the internet and the financial crisis broke the cashflow and suddenly journalists all over the world started having ethical problems. Content, that’s what they call us now, says an angry blonde guy in the Brufani bar. Content is this nasty stuff you put in a container owned by someone else. His face is red and a vein is pulsing under his skin like a notification. And what the fuck is an advertorial?

It’s the drink, it’s making him ill, says a beautiful girl and pushes the glass of Negroni back into his hand. Negroni is a dark red poison with an orange peel. It’s kind of overpriced, but it does the job: journalists start the day like ambitious working-class youth, chasing the future; in the evening, they just need a little nudge to become aristocrats living the moment.

The bar suddenly gets overcrowded, everyone’s having Negronis and sharing quirky anecdotes about humankind, but a couple of people remain working-class well into the night:

There’s Svetlana from Sofia, bartending for fifty people with a name tag that says Fiorina;

There are these two Romanian girls working for a British journalism website, connecting the industry just like journalism is connecting the world. They don’t sound Romanian. They’re hunting for ideas — the best ones are not those with shiny presentations, but the ones worth talking over a drink;

And then there’s me, following them like a Ukrainian cousin in a camouflage sweater, looking over their shoulders and writing everything down in this dotted IKEA notebook, drinking white wine until everything melts into this shiny substance called the future.

We’re moving towards the irrational. That’s just how history goes — you have this romantic era that fuels a revolution of some kind, and then things settle down into common sense and everybody licks their wounds until it’s time to go again.

We’re just starting the greatest revolution that humankind has ever seen, allegedly. It’s gonna be technological and ideological and it will change us forever. And journalists are supposed to guess it, experience it and guide others smoothly into it. We have to tame the irrational while being irrational ourselves.

Feelings spread like a disease, says a wine-drinking man. People don’t share things because they’re true. They share them because they feel emotion — love, hate, fear.

The only way to get rid of it is to give it to someone else. This lack of objectivity is fine and dandy when you’re writing a gonzo story on digital journalism, but it becomes dramatic when you’re in a war zone.

Journalists were able to move on the ground and talk to all sides on the pretense of being an impartial witness — and that prevented lots of nasty stuff from happening. Now, armed groups around the world prefer to blow the brains off any journalist — not because they wrote something bad, but because of what they represent. The groups broadcast their own vision of the world on social media and everything else must die.

The world doesn’t really die, but the reporters have to report on rumors from neighboring countries. The few ones who stay on the ground are more like guerrilla fighters, smuggling out information to people like this Syrian refugee — a bearded dude in shorts and skater shoes, talking in short bursts with echoes in this Italian palace which looks like a church. When ISIS came to his city, he and others fled and started a news organization in exile, reporting on executions and airstrikes. ISIS killed their friends and families and posted the videos online, then came after them and assassinated a couple of their colleagues in Turkey.

So they’re moving towards the West and now they’re invited to Perugia. Hundreds of people are stuck at the entrance of the Palazzo dei Priori (Palace of the 1%) because of the security measures in place for these guys.

I’m sitting on the fountain in the main square, trying to guess who has the special backpack. The Carabinieri are doing it too, checking out the crowd with worried faces, trying to ignore the harsh scent of hashish blown by the students chilling on the cathedral’s stairs.

Inside, the moderator shivers with excitement. How are you holding up? The Syrian dude makes a pause and contemplates the frescoes in the palace, depicting coats of arms for rich families that lived hundreds of years ago. There’s a balloon dragon stuck on the ceiling. I get goosebumps, the skin still wet from the rain. Here comes the answer: Outside the Palazzo, a barefoot Jesus stands on a chair next to a statue of Edward Snowden and shouts It’s a disgusting world-ah! The media is in a conspiracy against the refugees, against the starving children in Africa and the besieged children in the Middle East.

The journalists waiting in the rain for the next session are not impressed. They just want to get inside the palace and discuss some serious journalism stuff. Tough luck — when they finally get in the speaker starts talking like the Jesus outside.

Hundreds of thousands of people died in Syria. It’s our fault.

The English translation is coming out of the headphones calm and clear, but it doesn’t really fit this bald guy shouting in Italian, strangled by his tie. He just returned from Syria and he’s fucking angry, we’re all wrong.

We actually have plenty of information on what’s happening in war zones — a daily stream of photos and videos, live satellite imagery, hundreds of sources and covert operations. But this stream of information is channeled into a couple of narratives put together by the people interested in perpetuating the conflict. We put too much emphasis on officials and fighters, rather than the silent and peaceful majority.

We failed to build a narrative that could stop the massacre. My face turns red, my stomach collapses into itself, my limbs are shaking harder and harder until they get in sync with my heart pumping blood into convulsions that grow and grow until they take the shape of letters on my dotted notebook.

It’s not the whole massacre thing that got to me; it’s this girl — she’s sitting right here at the bar, encroached on a guy who’s too drunk to respond, but not drunk enough to miss the message. It’s a daring gamble: she’s trying to close a business deal with the guy and to show her colleague that she’s better than her, while throwing me glances of her beautiful eyes.

The gamble backfires; the colleague is angry; she turns to me:

– What are you doing?
– I’m recording gestures and guessing their causes.
– Well why don’t you ask the actual people?
– They don’t usually realise it themselves, and when they do they’re too horrified to tell anyone.

We’re in a deadlock. It’s like Eastern Ukraine in here, we’re all digging trenches. Nothing is objective any more. Not even stealing the giant champagne from the hotel lobby can make it right.

Maybe it’s not cynicism that’s destroying journalism,
but too much empathy with all the horrors in the world. I wake up inside a whale — its wooden backbone is bulging out of the ceiling, its flesh is bricks, its skin is white plaster, its guts are metal.

I’m safe — my dotted notebook and my phone are right here on the nightstand. There’s a window: I see a hilltop and millions of rocks blended into a city. Every rock is polished by hands and asses and hundreds of years of compliments until they’re all held together by ideas, not mortar.

I may be hungover, but the metaphor isn’t lost on me.

We’ll find a new way of writing.
We’ll build a new narrative and polish it until it works,
and when it’s useless we’ll marvel at its sheer beauty.

We’re gonna have a beautiful journalism and the people are gonna love it. 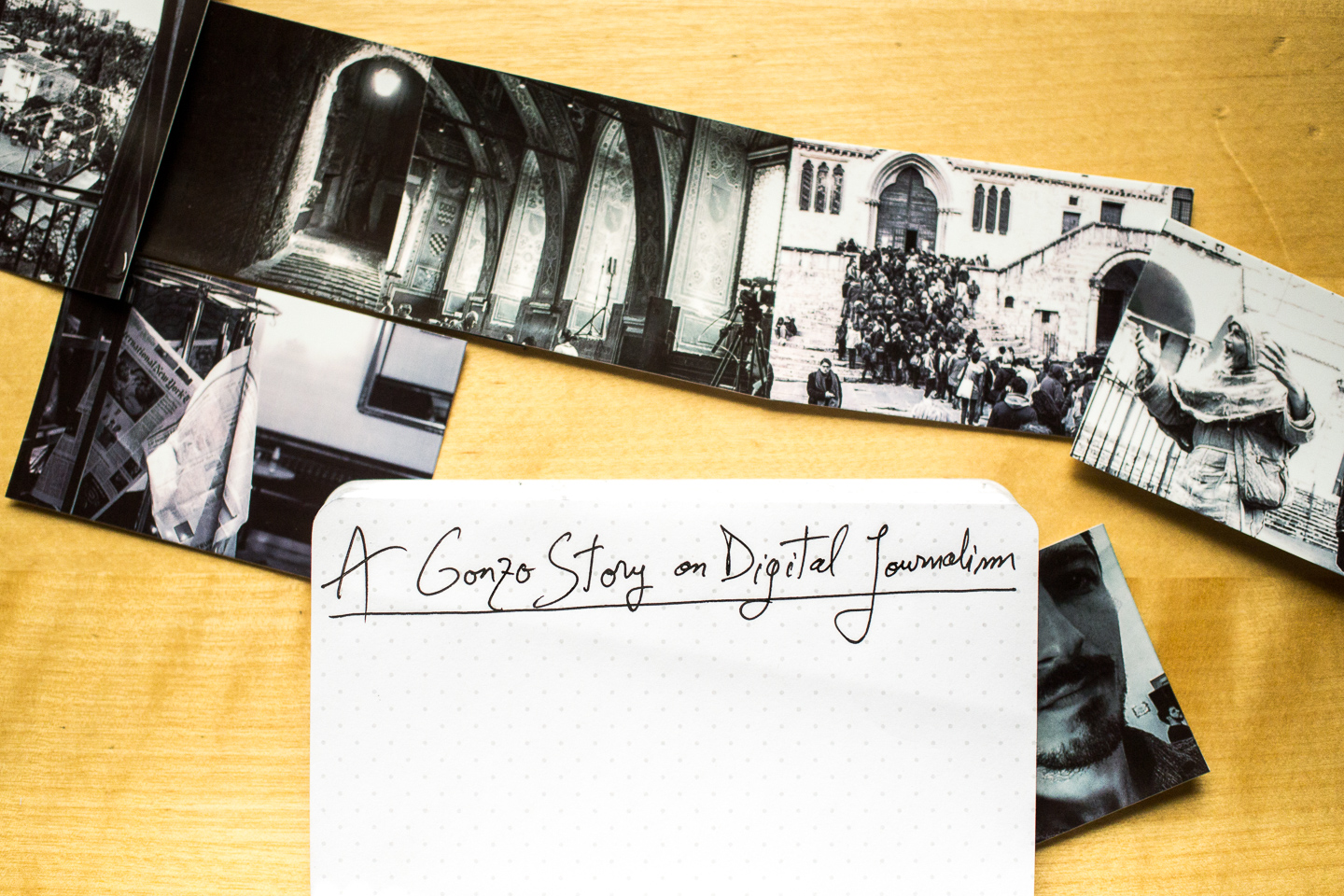