Journalist Beaten by Policemen while Investigating Police Abuse in Bucharest

On Monday evening, reporter Ștefan Mako was beaten by policemen in the Old City Center of Bucharest, because he had filmed them while beating another man. They asked for his ID, confiscated his mobile phone, threw him in the police station, hit him, verbally abused him, spat on him and threatened him, then politely released him.

For several months already the journalist has been documenting the trial of a policeman accused of having beaten a begger to death, in the context of a large number of complaints and investigations regarding abuses by Old City Center and Police Section 10 in Bucharest. Here is the journalist’s statement and a sequence of the video recording we have managed to recover from the telephone:

At around 7:45 PM, I was riding my bike around the Historic Center. I saw two policemen talking to a man, next to a kebab shop. They asked for his ID and made him empty his pockets. The guy did as he was told. One of the policemen got angry, maybe because the guy was too slow: “What are you doin’? Move! When I tell you to do somethin’, make sure you do it!”. The guy panicked – “hey, what are you doing? Why are you touching me?” and jumped the policemen. The officers restrained him right away, layed him on the pavement, punched him and kicked him, then handcuffed him.

I took out the mobile phone from my pocket and started filming. “This is what they teach you in military school? Aren’t you ashamed?”, an old man behind me asked them. An older policeman, wearing civilian clothing, came to me:

– Get away from here!
– Leave me alone, I am a journalist. This is public space.
– So what if you’re a journalist! Get the fuck out, buddy, I’m being nice to you, okay?

Then he slapped my hand holding the phone and went to pick up the officers’ radio stations, which had fallen to the ground. Meanwhile, the two policemen in uniforms took the handcuffed man to the station. I started following them, filming them from a distance.

In front of the police station, I saw the older policeman talking to two officers, who then approached me and asked for my ID. Before I could hand them my papers, the officer in civilian clothing came and grabbed my phone, while the others carried me away from my bike, slapped my head and threw me inside the station. This is where they stop my video recording:

I find myself inside the police station, one of my ears is buzzing, I think I must have been punched, and all of a sudden, he grabs my jacket and slams me against the wall, then punches me in the ribcage. The policemen yell at me as if I had killed someone. I can hardly take out my press card, when the dark haired policeman grabs it and throws it against the wall: ”You’re a journalist? I piss on you!”

In the same room there are the handcuffed guy and two other agents taking notes, no reaction whatsoever. I empty my pockets while one of the cops is searching my phone and erasing the recording. The old policeman shows up again: “Is this the press guy? Where’s your card?” I told him the guys had just thrown it around. “Fine, I’m out.”

A police officer starts reading the info on my ID card and bursts out again: “You’re from Covasna district, huh? You’re a country boy and you talk back?  Film my dick, then, film my dick! he says, bending towards me, one hand on his slit, then slaps my left cheek and spits me in the eye.

His choleric colleague keeps taunting me, saying I caused a scandal, and I keep explaining them I did nothing but film, other people were making fun of them.

Then the taller policeman grabs me and tries to drag me in the back, probably to the restroom. “I’m gonna fuck you in the ass, you motherfucker! You call this journalism? I’m gonna fuck your ass!” He keeps pushing me and yelling at me: “Don’t you show any civic spirit? You film us instead of helping us out? When you saw that man attack us, you should’ve minded your own way, not start filming.”

I keep grasping the door frame with my hand, until one of the officers who had been taking notes tells me to sit on the chair. The guys calm down a bit. “You have no idea what being a cop means. Have you been to 200 bars and pubs a day and saw what I saw? Did anybody ever threaten you to slit your throat? Why don’t you join me one night, so I can show you what being a cop means.” I tell him I would like that.

They keep softening. “How are the people in Covasna?” “Like all people, some good, some bad,” I tell them. “They know their place, right? That’s what I’ve heard.”

The tall policeman hand me my ID and shyly shakes my hand, like we’re buddies. “Well, Mako Istvan…” I ask him if I can leave, they agree. The dark-haired man gently leads me to the door, but he still adds that I did not to the right thing.

Have a nice evening, I tell them. “You too.”

I went to the hospital, where I waited in line for five hours, together with other people who had been beaten up, until one doctor finally noticed me. The verdict says “blunt thoracic injury”. The old policeman in civilian clothing, who had the officers bust me, is the Historic Center Police Station chief. His name is Eduard Mardare and his Facebook photos make him look like a nice family guy:

Here are the two policemen in uniform, who beat me, verbally abused me, spat on my and criticized my civic spirit. The taller one is called Bogdan. We will make a complaint and follow all legal procedures. A long way of bureaucracy and intimidation lies ahead, but we are determined to go through with it and document the entire humiliating process.

We do not expect justice, as long as Police is a state within a state, governed by the rule of violence. When the aggressor is a policeman, the mechanisms by which he could be held responsible are biased. They defend each other.

Despite this incident, our investigation will include the policemen’s perspective, as they often come from troubled families and find in the Police institution a culture of violence, which they use in order to deal with a dangerous profession, weakened by poor legislation. We also know plenty of honest policemen, who feel ashamed by this sort of incidents.

If you know any other cases of police abuse (especially by Station 10 and around the Historic Center), please share them with us at hortensia@casajurnalistului.ro or post them on Facebook, under the #BataieLaPolitie hashtag.

The investigation goes on. 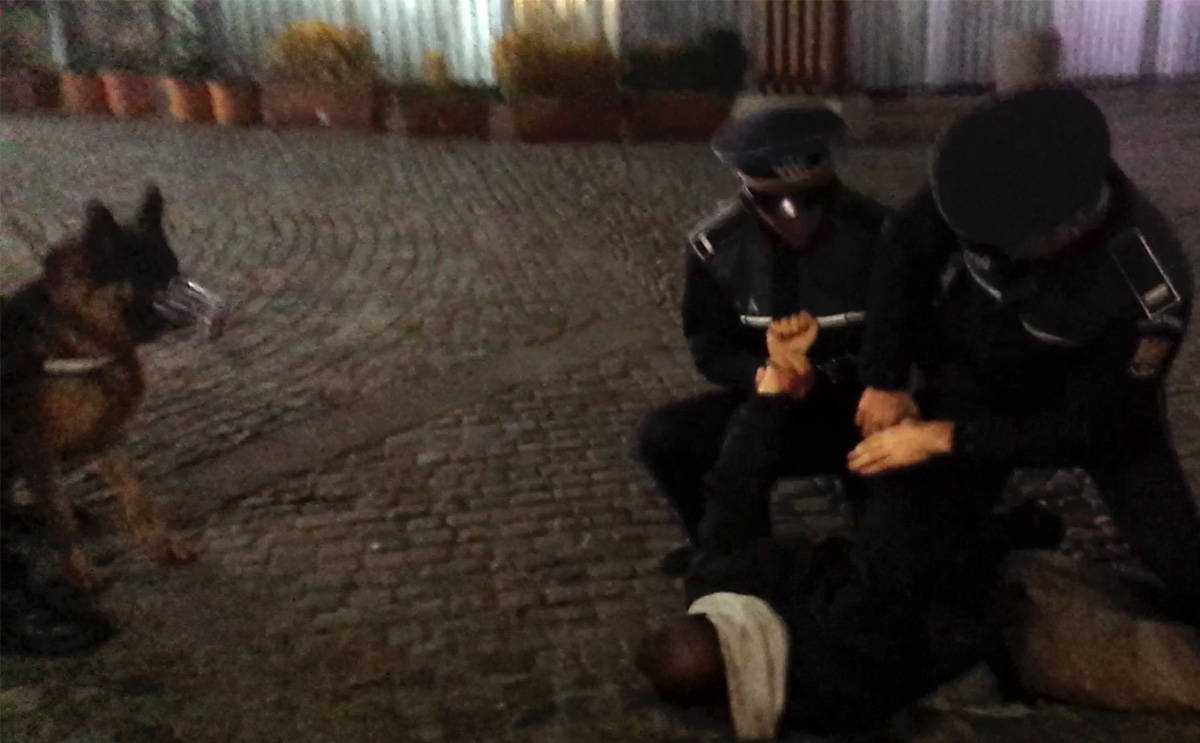