She’s rather short, donning a black handkerchief on her weary head,
and she’s gracing Magheru Boulevard shouting the lyrics:

We’re not numbers we’re free, we’re so alive
Cause the day we give in is the day we die

She’s putting one determined foot in front of the other, pacing her steps according to the lyrics, and by the time she’s reached “the day we die” she raises her clenched fist. All around her are thousands of people shouting: co-lec-tiv, CO-LEC-TIV.

Colectiv was the place in which 32 people met their untimely fates during a rock concert. But the collective she’s referring to translates into the consensus everyone is sharing in the aftermath of the tragedy. The band’s lyrics have become something of a credo, and they’re being imbued with an almost mystical passion when recited or shared on Facebook. The march is still in its early stages and there still are moments when the crowd is throttled with a deluge of emotion, silencing them. That’s when it hits everyone, over and over again: the remembrance of the last few days. Bucharest suffers from post-traumatic stress disorder. The fire ignited waves of pain which swept everything in their path. Every young man or woman in the city probably has at least one acquaintance that lost someone dear. Tragedies collide, mix up, get amplified and are now pouring out onto the streets.

The waves keep their strength, but in reverse. Despair is being swept away by waves of grief. Shouting commences near the Government, spreads across the whole Victory Square and bangs up against the large building facades, returning as echo uttered by thousands of mouths. One of these mouths is hidden by a makeshift balaclava, made out of bandage. The reverberation of the tragedy has reached many social hollows. There are many rockers, corporate workers, Dacians, punks, commies, footballers, anarchists, family people, you name it. Some are reciting Our Father, others are chanting the national anthem, and others are calling for resignations.

One guy is climbing the shoulders of another guy and shouts in his loudspeaker: grab each other’s arms and let’s go get ‘em! Them referring to the belt of gendarmes bolted to the front of the building. They greet them gently, but won’t let them through. A public person with a green hairdo is caught in the heap and expresses something in the range of confusion and fright. Citizens flashing religious icons curse at the police.

A negotiator breaks through the protesters’ ranks and shouts in his loudspeaker:

The protesters answer him with a spontaneous sentiment:

We’re mourning, asshole!
Down with that Oprea cunt!
Assassin government! In another part of the square they’re shouting: Spineless! Spineless! Sound travels straight into a wall and bounces back sounding more like: Lifeless! Lifeless!.

In the few days since the tragedy, causality has found its way into people’s minds between the spineless and the lifeless; between the first-minister and the first aid. Death is meaningless, but the living need meaning to keep on living. They can’t have died in vain, their deaths count for something. We’ll make them count. Almost everyone wants the resignations of . Any further and it’s anyone’s Romania. Some people want an entire makeover, others promised to themselves not to throw cigarette butts on the ground and obey traffic regulations. Maybe we should get involved, says a kiddo to his buddy while making their way in the crowd. Maybe even in politics.

We want health, not secret services!
We want hospitals, not cathedrals!

OK, there is a general direction: Hey you, Government, watch out at least for people’s lives; we’ll manage with our spirituality and our private lives. One guy puts it to the gendarmes rather frankly: For me, there is no such thing as receiving an order. I have a free will.

And free will is quite pissed this time, so much so that people shouted upon arriving at the (ahem) People’s Palace Burn it!, followed by Hey, let’s go to the big cathedral and raise some hell there too. Chaos is proving to be a pain. It’s required in any social movement to destabilize the system in order to make it more prone to change. But this social unrest is based upon law and order. Chaos is both the ally, and the enemy. It’s not a check-mate situation, but there are a lot of practical dilemmas:

The protest starts at Universitate and blocks off the entire Magheru Boulevard on its way to Romana. Two protesting seniors stop at a red light. The swarm passes by them from all directions. They wait, and then wait some more, think about it a little, grab each other’s hand and cross the street hastily. Ilegally. A group of friends is holding a council: where to, where to? They bounce a few propositions around:

As it happens, the mob has this exact route in mind, with a starting and finishing point set to Universitate. Running around town works like a rise-and-shine for people who spent their last few days in a state of depression. At first glance it seemed like a remembrance procession, but towards the end it looked more like a full-blown riot: from the city hall, straight to the city jail. We’re coming, Piedone!

Not a devil in sight at the Patriarchy, but people are shouting, from the street side of the fence, against the church’s excesses: Hey, All-too-blessed, we wouldn’t want to ruin your nap! Back in Constitution Square, a few youngsters hop the fence of the Palace and run around the People’s plains until they’re intercepted by security. At Romana, an old-timer solves the problem with the Satan-worshippers quite elegantly: “Bolshevism is bred in the satanic branch of freemasonry”. So it’s OK, it’s the commies to blame all over again. “Karl Marx was one of Satan’s priests”.

On Victoriei, one guy kneels in front of a television studio’s façade, on which an ad says Space to rent. 150 sqm. He’s shouting: Everyone, let’s bow down to Nasul TV! People just pass by, leaving him be. He rants on for minutes on end, motionless, with a black raincoat on him and his hand clenched on a handbag. He suddenly stops and waits, with a face turned savage by pain. Vuvuzelas start screaming. The man is not pleased with the reaction, so he carries on, with even more lament: “Where are the youths?? Where are the youths???” People look at him frightened. From the loudspeaker, the voice is chanting “Our Father who art in Heaven, hallowed be Thy name…”

“Piss on him!” shouts the man with a black raincoat and disappears into the crowd. Back at Universitate, the protest is carrying out its finale rituals, with the football supporters shouting and candles being lit to commemorate the Revolution and the Mineriad. It’s a familiar feeling that stretches all the way to January 2012, when there were beatings and arson.

The violent hooligans, as they were named back then, became “naïve youngsters”, to be subsequently named “the Facebook Party”, and ultimately, one of the driving social powers of Romania. It needs no nickname; one can refer to it as the street.

In 2012 it overthrew Boc, in 2013 it saved Rosia Montana, in 2014 it saw Iohannis elected and in 2015 it demolished Ponta. We are probably approaching the moment that will see the conflict between generations evolve into the candidacies stage. – Best of luck!
– I truly hope they get their country back, I sure do! 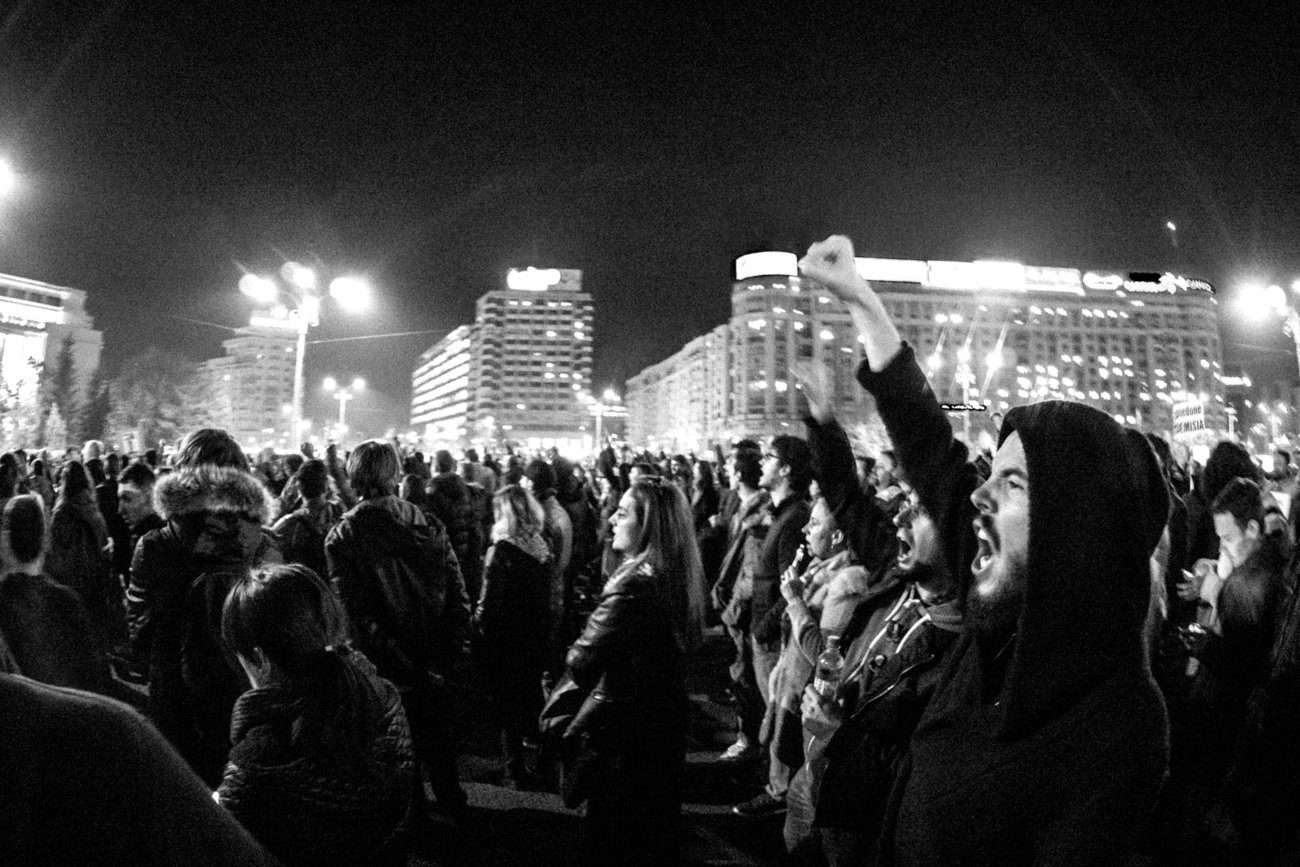